I’ve been running in the Altra Escalante 1.0 for the past year.  These are my primary shoes for non-trail running. I’ve put an impressive number of kilometres into them and I must say they’ve served me well. They’ve done nearly 2000km (1242 miles) and to be honest, they still feel pretty good.

And that’s just the running. I also wear them casually, so they’ve probably done a similar amount of non-running kilometres. I actually don’t feel an urgent need to replace them just yet. There’s a bit of wear on the outsole. In fact, there’s not a huge amount of grip left at all, but the upper is still in great condition and the mid-sole is still quite spongy.  Although the outsole is considerably worn, I think I'll probably get another 500km out of them.

Before we get into my thoughts, here’s a quick overview of the specs of the shoe.

Enough of the marketing nonsense.  Let’s get into my thoughts on the Escalante after nearly 2000km.

The upper is one of the Escalante’s best features.  The knit mesh is a comfortable, lightweight fabric. It is flexible and soft and is quite unrestrictive to toe movement.  Coupled with the foot-shaped toebox, the fabric gives the toes plenty of room to move and splay. I have seen some people complain that the upper sometimes pushes on the toes causing pain, but I didn't experience anything like that.  The fabric breathes very well. I didn't have any issues with dampness, and the shoe can be comfortably worn without socks if desired. The tongue material matches the upper fabric and is quite comfortable. It provides a layer of protection from the laces without excessive padding but is soft against the skin.

The Escalante has a traditional lacing system that works well, is comfortable, and holds the foot fairly securely. I did find that I had to double knot the laces to avoid them becoming untied.  Invariably, the laces would untie themselves within a short distance. Presumably, this is due to the flexibility of the knit upper.

The heel collar of the Escalante is very soft, yet more than capable of holding the foot in place.  The inside of the heel collar is impressively durable. This is an area that I often see considerable wear early on, but after nearly 2000km, the Escalante shows only minor wear.  It’s a pretty important area as any wear here can lead to irritation of the back of the foot, especially when running long distances or lots of kilometres per week. Minor wear on the heel counter

The zero-drop midsole is fully cushioned and is a good balance of soft cushioning and low weight.  The Altra EGO foam provides the kind of cushioning that people fall in love with. It is durable and soft and provides a responsive and springy ride.  The feel of the foam does not appear to significantly degrade over the life of the shoe.

This shoe is awesomely flexible but doesn’t lose its shape over time. However, because it’s so soft, it sometimes feels a little squishy.

The insole is pleasantly comfortable and the drainage system works well.  I rarely experienced excessive moisture in the Escalante, even sockless, and at distances up to about half-marathon. When moisture was inevitable (such as while running on my treadmill in an un-airconditioned shed in the Australian summer), it didn’t cause any major issues.  I suspect the breathability of the upper was important here, but there are also moisture ports on the bottom of the insole that help to channel the sweat away.

The outsole rubber provides good grip on roads, paths, tracks and indoor surfaces, even in wet conditions. It’s not awesome on harsher terrain or mud, but it’s a road shoe, so it's not really supposed to.  The outsole rubber is divided into sections with exposed midsole in between, providing the impressive flexibility. After a few hundred kilometres, however, a section of the exposed midsole suffered some noticeable wear.  It was as if that section of outsole rubber was slightly misaligned with the part of my midfoot that strikes the ground. I have seen others mention this as well, so it’s not just me. It doesn’t appear to compromise the function of the shoe though, so it’s not a major issue. 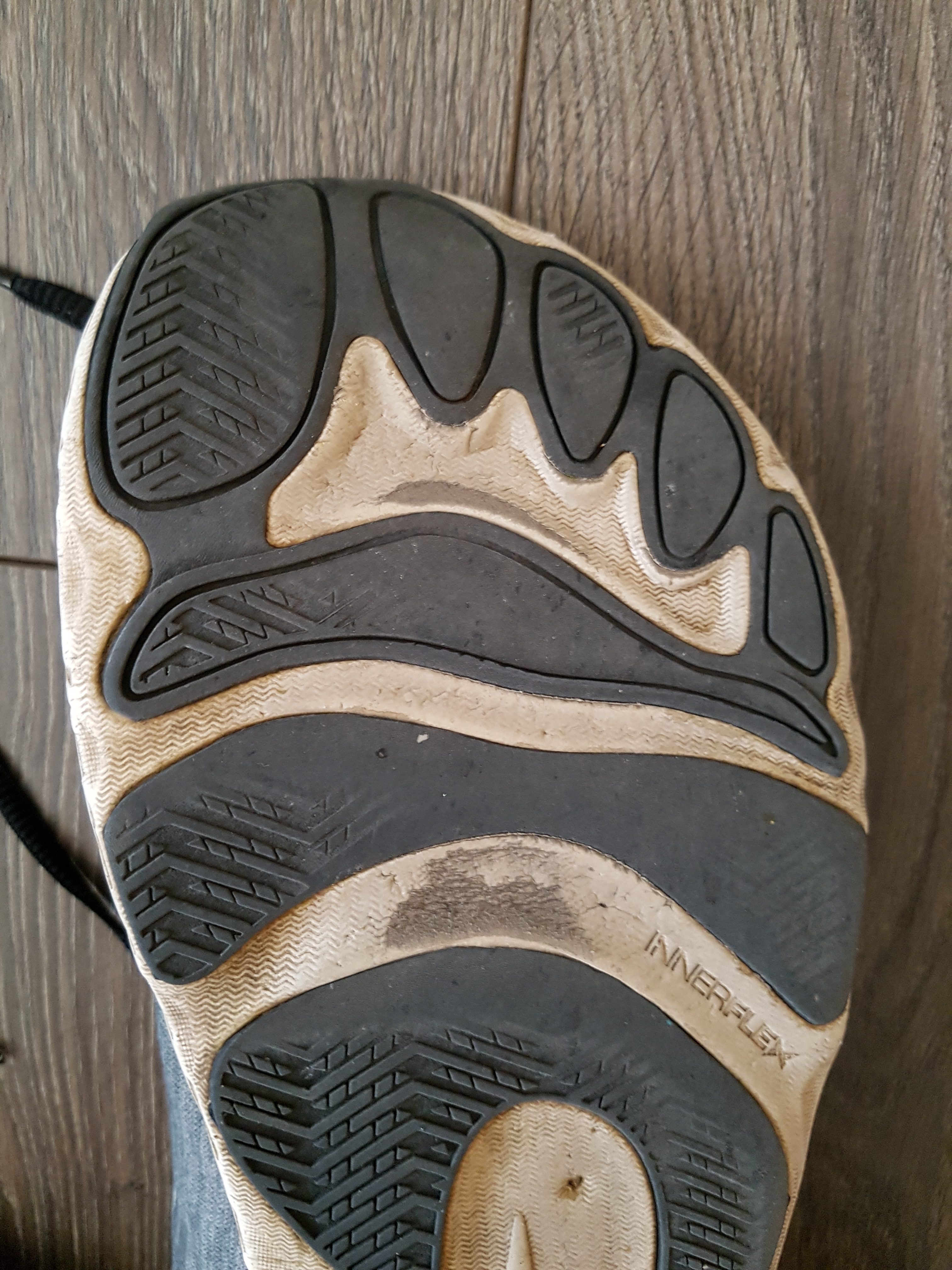 The Escalante has a foot-shaped toe-box which lets the foot relax and spread out naturally and comfortably.  The padded heel collar locks the heel in place and feels snug and secure.

The Altra Escalante has a standard running length and comes in the standard medium width of D and B for men and women, respectively. Also, its wider toe-box makes it suitable for runners with wide feet and those who want to encourage natural toe-splay.

Initially, the shoe felt a bit tight, but after a few runs, the upper relaxed and the fit seemed much more comfortable on the top of the foot.

For me, this shoe appears to fit true to size.  I usually wear a size 11, but I went with an 11.5 after reading recommendations to buy a half size larger than normal. In my case, I think it was slightly too big and the 11 would have been correct.  I wasn’t able to try the shoe on before purchasing as we don’t have any stores locally that stock Altras. I wouldn’t recommend sizing up if you’re thinking about it.

I only use the Altra Escalante for road/path running. I wouldn’t venture too far off the beaten track with these as they do feel a little sloppy on uneven terrain.  I find that if I step on uneven surfaces, the shoe has a tendency to try to roll my foot off the side. It hasn’t resulted in any injuries, but it just feels a little unstable.  However, I haven’t really tried to lock my foot down aggressively. I leave the lower section of the laces fairly loose to allow my forefoot some extra freedom and tighten the upper section as required.

I’ve heard some people complain about durability, but I’ve found the Escalante particularly durable.  The upper is virtually unscathed, and the mid-sole is still quite spongy. The outsole, however, is the part that can’t hide the punishment it’s received after nearly 2000km of use.  There are significant sections that have been worn completely smooth, and even some parts where the mid-sole is wearing. However, even with this worn outsole, the shoe only lacks traction on very smooth surfaces.

Usually, by the time my shoes have reached about 1000km, some of the outsole pads have worn through or have begun to become unglued.  I haven’t experienced that with the Escalante though.

As well as being, light, flexible and comfortable.  The Escalante can take a bit of mistreatment. They hold up perfectly well to being bunged in the washing machine when they get a bit stinky or dirty.  Although I’m sure it’s not officially recommended by Altra, it makes maintenance a breeze. Even without the washing machine method, the shoe is easy to keep clean.  The texture of the upper hides the dirt and the white midsole is easily wiped clean.

Even though the upper is a thin, soft material, it is particularly durable. After over a year of running and casual use, the upper is still in perfect condition.  There are no rips, snags or wear to speak of.

The upper is still in great condition

I usually don’t worry too much about how a running shoe looks, but the Escalante has versatility nailed. It works well as a running shoe and a casual shoe, and if you’re lucky you can get away with it at work.  Although at first, I thought it looked a bit like a bowling shoe, I got used to it and wear it pretty much everywhere. There are plenty of colour options from drab to bright. I chose grey which looks quite subdued when I wear it to work.

What’s not so great

This shoe will handle any pace on the roads and distances up to a marathon without too much trouble. I’ve done just about everything in this shoe. Recovery runs, sprint intervals, 5k tempo runs, 17km work commutes and a couple half marathons. I still haven’t done a road marathon though. I’ll save the long distances for the trails.

Once you feel how comfortable this shoe is, you’ll want to wear it all the time.  In fact, it’s nearly midnight and I’m wearing them now writing this review.

These were my first pair of Altras and it’s safe to say I was not disappointed. I’ve since bought the Lone Peak for trail running and am equally happy so far.  I ran a 56km event in September and didn’t even think about my shoes while I was doing it.

So, what will I be buying next?  Probably another pair of Altra Escalante to be honest.  I think I’ll give the 1.5 a try.  For weekday road training, they do everything I want beautifully, and they don’t leave me wishing for anything else.  So there’s no need for me to try anything new at this stage. I’ve never bought two of the same shoe in a row before, so that’s saying something.

If you’re looking for a shoe that you can run, walk and work in day after day for at least a year, you won’t be disappointed with the Escalante.  It’s not what I’d call a super expensive shoe, but it’s not super cheap either. However, it is definitely good value. Since the 1.5 has been out for a while, you can probably find the 1.0 for a bargain and I’d highly recommend snapping it up if you can.

Have you tried the Altra Escalante 1.0 or 1.5?  What were your impressions? If you’ve tried both, how did they compare?  How did you find the comfort, stability and durability? Let me know in the comments.

I bought these shoes with my own money, ran in them for about 2000km with my own feet, and made them stinky with my own foot sweat bacteria. I haven’t received any incentives for this review.